After 15 years of the Public Eye, the Berne Declaration and Greenpeace Switzerland are taking stock and, in their farewell to Davos and the WEF,… Read More »Public Eye Lifetime Award and The Yes Men Mark Farewell from Davos

(Geneva, 13 November 2014) – Nations must continue and deepen their deliberations in 2015 on the questions relating to ‘lethal autonomous weapons systems’ with the… Read More »Substantive Talks on Killer Robots Must Continue – Convention on Conventional Weapons decision due on 14 November

On the occasion of the 4th anniversary of the coming into force of the Convention on Cluster Munitions (August 1) the Cluster Munitions Coalition is… Read More »Press Release: Four years of cluster munitions: Use forbidden! investment allowed?

Brussels/Berlin, May 26, 2014 – Deutsche Bank has told Friends of the Earth Europe and Rettet den Regenwald that it sold its shares in the… Read More »Press Release: Deutsche Bank divests from Bumitama after civil society pressure 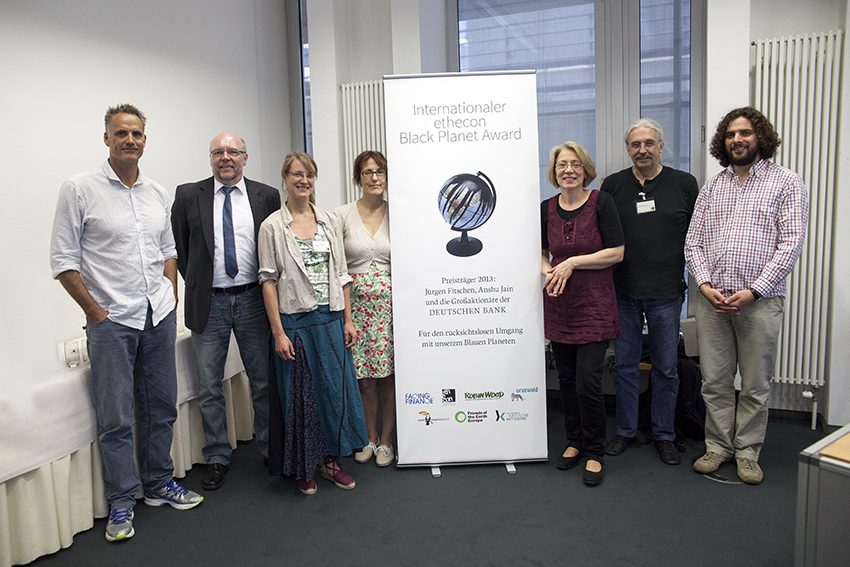 Exhibition: Dirty Profits: Commodity Investments and its impacts on People and the Environment. “A not insignificant portion of multinational profits are derived, now as much as ever, from openly controversial practices that violate people and the environment,” laments Thomas Küchenmeister, coordinator and initiator of the Facing Finance Campaign. He goes on to criticize the inadequacy of international tax laws, saying, “The fact that multinationals are also circumventing tax laws adds to the unjustness, despite the practice being largely legal.” According to the European Commission, the EU loses around 1 trillion Euros every year due to tax evasion and/or avoidance maneuvers.

Recently, international attention has focused on the Russian energy giant, Gazprom, which has a reputation for corruption and anti-competitive practices. The Russian coast guard arrested several Greenpeace activists this summer during a peaceful demonstration against Arctic oil drilling at the Prirazlomnaya oil platform. The activists were detained for more than two months before they were eligible for release on bail. They currently stand charged of hooliganism. Investments in Gazprom by European banks, led by BNP Paribas, ING, Unicredit, Deutsche Bank and Commerzbank, totaled €3.4 billion during the investigation period.

Dirty Profits 2 calls on financial institutions to incorporate international human rights and environmental standards into binding financial service regulations that exert influence on companies to comply with these standards.

Furthermore, lawmakers must immediately take steps to end the financing of controversial sectors, (e.g., nuclear weapons and cluster munitions). Also, tax benefits for pension (“Riester”) funds, should be limited to financial products that meet sustainability standards. Certification of such retirement, or “Riester,” products, needs to be monitored by an ethics committee; civil society further calls on bank customers to scrutinize their bank’s business practices and, if necessary, change their financial service provider.