Update on Vote out Killer Robots! – SPD, like Greens and Left now also for it! 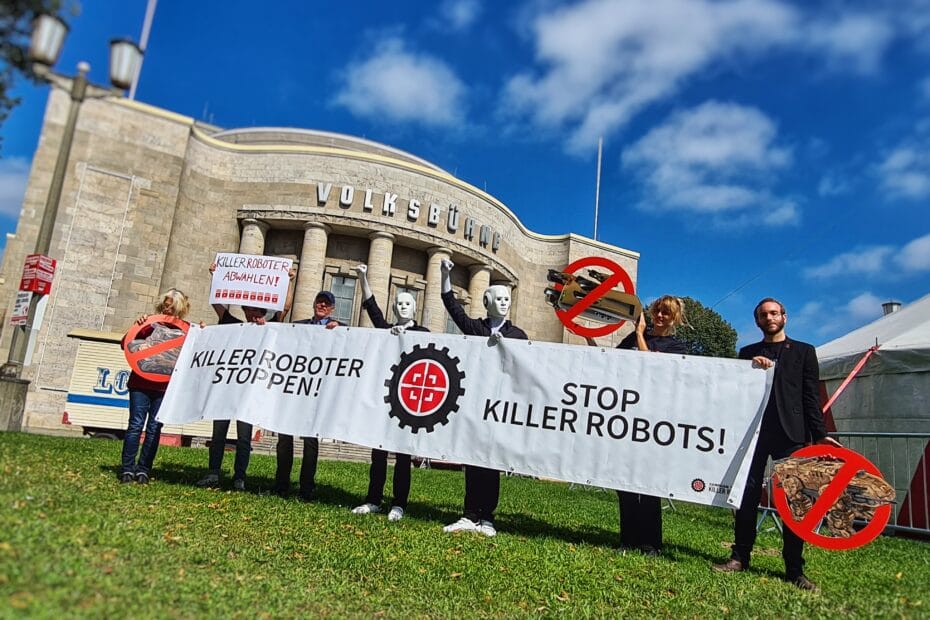 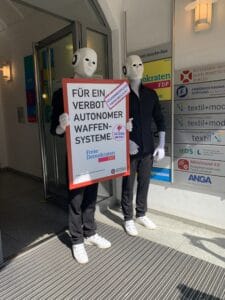 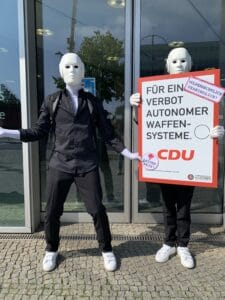 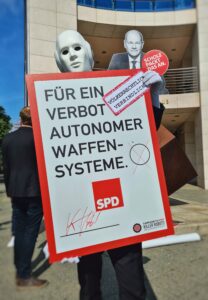 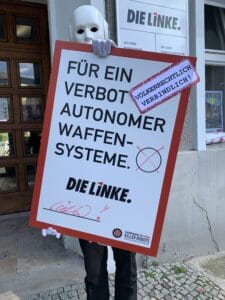 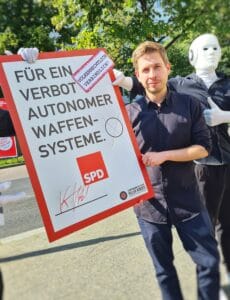 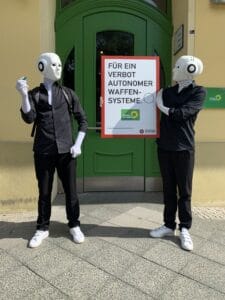 On Thursday, September 2, 2021, a political action from the German section of the international campaign STOP KILLER ROBOTS took place in Berlin. The leading campaign organizations Facing Finance e. V., DFG-VK and urgewald called on the CDU, FDP, SPD, Bündnis 90/Die Grünen and Die Linke in front of their respective party headquarters in Berlin to publicly commit to a ban on autonomous weapons that is binding under international law.

Such a ban should apply to weapons that can detect and destroy (human) targets without human control. In the last parliamentary vote to implement such a ban in January 2020, 80% of MPs opposed it. Unfortunately, many MPs at that time did not recognize the need for such a ban, as well as the danger posed by the dehumanization of war. This political action is looking to change that in the coming legislative period!

Now there is cause for hope. Besides the Green and the Left party, the SPD represented by Kevin Kühnert, deputy chairman of the SPD, is now committed to a binding ban on autonomous weapons under international law.  Jörg Schindler, parliamentary director of the Left Party, has made the same statement, so did Katja Keul of Bündnis 90/Die Grünen.

Both the CDU and the FDP did not want to make a public commitment to a binding ban on autonomous weapons under international law. The FDP [3] does not even mention the issue of autonomous weapons systems in its election program. A look at the program of the CDU [1] reveals that they support the “outlawing of autonomous-killing weapon systems”, but this lacks legal bindingness. Accordingly, in the last Bundestag vote, the CDU, together with the SPD, FDP and AfD, voted against motions to outlaw autonomous weapon systems [4] raised by the Green and the Left Party.

Although the SPD called for the outlawing of autonomous weapons systems under international law in its 2017 election program [2], they voted against motions to this effect in the 2020 vote. It is therefore highly gratifying that the SPD is now committed to the demands of the international Stop Killer Robots campaign for a ban on autonomous weapons under international law. It remains to be seen whether this change of direction in foreign policy will also be maintained in leading government responsibility, if necessary against the interests of German diplomats in Geneva, the arms industry and IT industry. The Stop Killer Robots campaign will follow this process critically.

The time for a ban on autonomous weapons is pressing. The arms industry has been perfecting autonomous warfare for years and these weapons are already increasingly being used. But algorithms and computers must never be allowed to decide about life and death!

Videos of the action:

The action was supported by www.pantomime-popkultur.de