Mount Polley Gold and Copper Mine given permission to pump treated wastewater into Quesney lake, despite repercussions of dambreak. 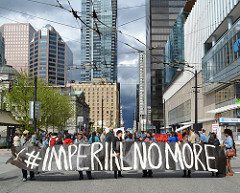 The failure of the Mount Polley tailings dam on August 4th 2014 in Canadian British Columbia, is considered to be one of the most damaging environmental catastrophes in coal mining. 4.5 million m3 of toxic mud and 10 million m3 of untreated wastewater flowed flooded out of the tailings dam and into the surrounding environment. The nearby shores of the Hazeltine Creek were severely eroded due to the sudden rush of water, this mix of excavated material and toxic mud carried with it vegetation1234. The 2m wide river became a 50m wide toxic lake. The water level rose about 1.5m and the Quesnel Lake, which prior to this catastrophe was known as one of the cleanest deep-water lakes, was transformed into a lake of toxic debris. In early April 2017, 3 years after the Mount Polley disaster, the Canadian government has introduced a regional drainage plan, which allows the Canadian mining company ‘Imperial Metals’ to deviate treated wastewater into the Quesnel Lake5.

This decision has been met with local opposition67.  The Canadian government has emphasized that residents were involved and community consultation did occur, and that the approval indicates the economic importance of Mount Polley. While residents admit to having been informed the process was claimed to be inadequate and they do not feel that all concerns were heard. The plan has also been rejected by First Nations who have collected 250 signatures opposing the drainage plan6.  The initiative Concerned Citizens of Quesnel Lake (CCQL) have made the case for stronger water regulations and are against the drainage plan. They have stated:  “We do not accept the plan. We drink the water. We swim in it. We fish in it.”, says Christine McLean of CCQL. The local populations have complained about the powerlessness against the company ‘Imperial Metals’ stating its influence on local government representatives. Since 2005 the Imperial Metals group has supported the incumbent liberal provincial government of British Columbia with generous donations of up to 130,000€8.

When Imperial Metals obtained permission to operate gold and copper mines in the 1990s, this did not include the discharge of wastewater into Quesnel Lake. Locals now feel bypassed due to the drainage plan. Nikki Skuce, project manager of the local Northern Confluence initiative, complains that the original pollution has not yet been remedied and pollution in the lake is still visible. There are also concerns that the drainage plan will lead to further pollution of the lake6.

The original tailings dam break in 2014 is attributed by experts to flaws in the design of the dam, which remained unobserved in the approval process. In January 2015, an independent inquiry committee concluded that the dam construction was too high and too steep, submerging the ground. In addition, there were a number of other problems, including an excessive amount of stored water, isolated elevations of the dam, erosion in the walls and missing sensors, which escaped inspection or simply have not been repaired9.

Not even a year after the accident, Imperial Metals was already allowed to resume limited operations, and since June 2016 it has returned to normal operations. So far, in connection with the incident, cleaning costs of more than € 44 million were reduced due to being taxed as operating costs. The public prosecutor has announced a suspension of the lawsuit against Mount Polley Mining Corporation, the daughter of Imperial Metals, as well as against the provincial government of British Columbia. Imperial Metals does not have to pay any penalties for the environmental pollution and a criminal prosecution has been prevented by the Canadian provincial government, Canadian taxpayers will now have to cover costs of just under 27 million € for cleaning operations.

In addition to Imperial Metals, which operates Mount Polley, the Canadian government is also increasingly being criticized for serious shortcomings43. On the one hand, inspections regarding safety regulations and environmental requirements were severely curtailed under Premier Gordon Campbell. An official check took place shortly before the accident, but not in the two years prior. On the other hand, the government failed to provide a sewage permit, although Imperial Metals had already applied for approval in 2006 because of the increasingly full capacity of the catch basin. It took six years for the Canadian government to issue this, while the toxic waste water in the basin continued to rise. The approval for the discharge of the sewage into Quesnel Lake, which was finally issued in 2012, was also inadequate, as the dambreak clearly shows. For this reason, Imperial Metals requested a new permit to direct a higher volume of treated wastewater into Quesnel Lake. This was still the case at the time of the accident510.  The extent of the catastrophe is therefore in part due to the lack of oversight by the Canadian government.

Facing Finance supports the petition Sum of Us – Fighting for People over Profits to Prime Minister Justin Trudeau, Justice Minister Jody Wilson-Raybould and Minister of Fisheries and Oceans Dominic Leblanc to take responsibility for the environmental damage of the mining disaster on land and water11. ​​This was created among others, by MiningWatch and has so far been signed by 34,264 people12.