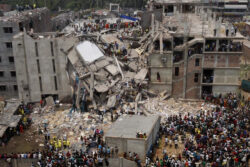 On April 24, 2017, the collapse of the eight-storey building complex Plaza Rana in Dhaka, Bangladesh, marked its fourth anniversary. Along with two devastating fires in the textile factories Ali Enterprises in Pakistan and Tazreen in Bangladesh, in which factory workers were burnt alive, the symptomatic inhuman working conditions in the garment industry were revealed1.  The newly published report, “Follow the Thread: The Need for Supply Chain Transparency in the Garment and Footwear Industry”2 calls on the fashion industry to increase transparency in global supply chains in the garment industry, and indicates cases where a substantial need for action remains.

The tragic accidents in Bangladesh and Pakistan document the enormous production pressure placed on workers, as well as the opaque supply chains of western fashion corporations. Only twelve companies immediately published information regarding their links with factories at Rana Plaza, while numerous other fashion chains denied any relationship .3. Only through the commitment of local activists, who searched for brand names in the ruins of Rana Plaza, were an additional 28 textile companies identified45.

The coalition of unions, human rights and labor organizations responsible for the report, contacted 72 fashion corporations requesting commitments to improved supply chain transparency. This would include the disclosure of manufacturing factories- a minimum amount of information regarding the names of factory owners and addresses of factory buildings as well as data on suppliers and subcontractors would be required. These are similar demands to those of the German Partnership for Sustainable Textiles (the Textil Bündnis), initiated by the German Minister for Development Gerd Müller.

A transparency pledge like the one suggested in this report, promotes the assumption of responsibility by large textile companies. Access to essential information allows employees, activists, human rights and labor organizations to expose infringements in supply chains and to inform companies about these in a timely manner, in order to ensure that those who have ben affected are compensated45.

A total of 17 leading fashion corporations such as Adidas, Esprit and the H&M-Group promised to integrate the transparency pledge. Several other companies have taken steps in the right direction by publishing names and addresses of their subcontractors, including Columbia Sportswear, Disney, ALDI Nord and ALDI Süd, who will start publishing information about their supply chains this year. However, they made no further commitments regarding the transparency pledge.

The coalition’s transparency pledge is another attempt to reach a minimum level of transparency in supply chains and to urge the fashion industry to assume responsibility. The garment industry is one of those branches with the highest risk of massive human rights violations – particularly female textile workers are at risk. Worldwide more than 75 Million people, mainly in emerging countries, work in the clothing industry, about three quarters of these are women7.

Facing Finance supports the petition Follow the Thread8 by the transparency campaign to persuade additional companies to make information regarding their supply chains available to the public. The petition is addressed to Forever 21, Urban Outfitters, Walmart, Primark and Armani. The five companies are asked to join the transparency pledge by May 31, 2017. In this way, large fashion corporations will need to pay attention to human rights violations within their supply chains and can be held accountable should these occur.

As Facing Finance9 has frequently pointed out, inherent injustices in the fashion industry remain. An increase in transparency, and a visible and demonstrable commitment by companies to transparency, allows investors and shareholders to make investment decisions in accordance with ethical and normative criteria.

The European Commission’s ESG commitments for banks and BlackRock: It’s about more than a conflict of interest

In early 2020, Larry Fink, CEO of BlackRock, the world’s largest and arguably most renowned asset management company, wrote in a letter to CEOs that “every government, company, and shareholder must confront climate change”. Not because it is morally important … Continue reading →

Cargill: Sustainability leader or worst company in the world?

Cargill is one of the world’s largest agricultural commodity trader and food processor and United States’ largest privately-owned company, with revenues exceeding $114 billion in 2018. The company dominates the global industrial agricultural system, a system which seeks to convert … Continue reading →