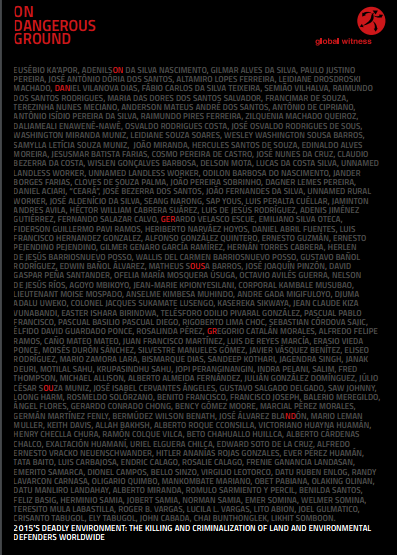 On 20th June 2016 the NGO Global Witness published their new study “On Dangerous Ground” drawing attention to the dramatic worldwide increase of killings of land and environmental defenders.

The study documents 185 murders in a total of 16 countries which is the highest homicide rate since records began in 2002 and an increase of over 59% compared to the previous year. Facing Finance already reported on an alarming increase in 20141.

Most killings of activists were committed in South America and Southeast Asia. In 2015 at least 50 activists had been killed in Brazil, over 33 in the Philippines, and 26 in Colombia.

According to Global Witness the real figure could be significantly higher due to a high number of unreported cases. Even if perpetrators are known, many go unpunished.

Main causes of the conflict between activists and companies and its security forces are the mining of raw materials, industrial deforestation, controversial land rights and planned hydroelectric power stations. The activists, who oppose their government and multinational corporations, are often threatened and later, if they cannot be intimidated, assassinated2.

The steadily growing demand for products such as wood or palm oil is driving companies to exploit new regions and expand their production. Population growth and the climate change increase territorial conflicts and the struggle for natural resources.

Global Witness is calling for governments to take action against the crimes. Governments and legal systems should protect potential victims and hold culprits liable.

The complete study by Global Witness can be found here.