Gas Flaring: Oil companies cause massive destruction of the environment 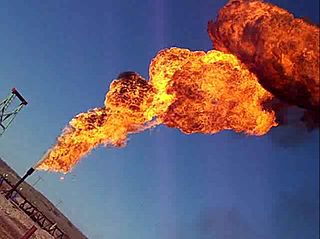 The inhabitants of Nigeria are faced daily with the disastrous consequences of the petroleum production. They suffer from the profit-oriented oil companies, which do not care much about nature and the resident population. The companies appear particularly ruthless when it comes to the practice of gas flaring, the burning of associated petroleum gas (APG), that goes hand in hand with the process of oil drilling. In this form it is mostly useless to the companies. The cheapest way1 is to flare the gas – a method with fatal consequences for the environment. The profit is the only thing that counts.2

In Nigeria these gas flares are burning day and night, often in areas, very close to populated villages. The population suffers enormously under the negative effects to nature. The harvest is contaminated with heavy metals and acid rain.3 But it also often drops out completely, because the clouds of carbon black diffuse enough heat to stop the rain. Many plants in the active zones dry up.4 Moreover the gas contains compounds detrimental to health, which spread freely in the air. The people have to breathe them in day and night. Many get sick, mostly of cancer or an illness in their lungs. Various newborn have birth deformities.(( http://www.youtube.com/watch?v=kDCwMEQw9Vc )) The carbon black goes endlessly into the atmosphere together with an immense amount of carbon dioxide. Two percent of the energy-induced global carbon dioxide emissions result from gas flaring.5 Each year about 400 million tonnes of greenhouse gas are released by gas flaring worldwide – an amount comparable to the emissions of 500 Million cars.6

Gas Flaring is not only pollution but also an incredible waste of resources. There are even different possibilities to use the gas: The companies could re-inject the gas into deposits, it could be used to fabricate chemical precursors or make liquid gas. The gas can even be transformed to energy. The amount of gas flared in Africa alone could provide half of the continent with energy! But usually this requires investments so those alternative solutions become unattractive for the profit-orientated companies.7

Above all gas flaring has been illegal in Nigeria since 1984. But the law does not keep oil companies from flaring petroleum gas. They rather pay the cheap fines than abstain from gas flaring.1Furthermore the companies have a strong lobby in Nigeria, which enables them to delay the deadline for ending gas flaring again and again. The country depends on the oil companies, 80 % of the public revenue are due to the oil production. Apart from that the state has assumedly its own interest in profit maximisation, because it is significantly involved in Shell Nigeria: 55 % of its income goes to the government of Nigeria itself. In return the military protects the areas of oil production.8

A recently shown German documentary accuses the oil companies Shell, Agip, Total, BP and Rosneft9 Gas flaring is not only practised in Nigeria but also in many other countries where the government does not act strongly enough. According to a study of the World Bank Group about 150 Billion cubic meters of petroleum gas are flared worldwide each year. Nigeria takes only second position worldwide – the ‘world champion’ is Russia.7

An oil company in Ecuador proves that there is an environmentally friendly and also profitable solution. The oil production has been nationalized, and since then the gas has been used as energy.9 But just one company is not enough. As long as oil companies like Shell, Total, Agip or others that act worldwide do not change their company policy and do not follow worldwide standards, the catastrophe persists – in form of flaring torches.