Local population should benefit from Investments 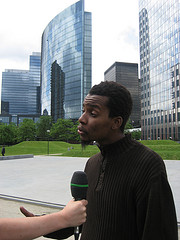 Today we interviewed Facing Finance partner mr Samuel Mondlane from the Mozambican JA! about their efforts to teach the international mining companies  some true corporate social responsibility. “Investing in development is good, but then the local population should  benefit.” Mine giants like Vale have recently engaged in mining for coal in Mozambique. Not only is this accompanied by side effects such as irreversible environmental damage and human rights abuses – local people being chased of their land -, the economic value is also questionable. “The mining industry promises thousands of jobs, but forgets to mention that this applies only to peaks moments during the construction. After two months the people then become unemployed again. In the worst case, they have given up their existence as a farmer to become a miner, and are now left with nothing. Mostly all high positions are taken by foreigners and it looks unlikely that this situation will change soon. These companies do not invest in human capital. ”

Keep an eye on this site to see the interview with Samuel on film !