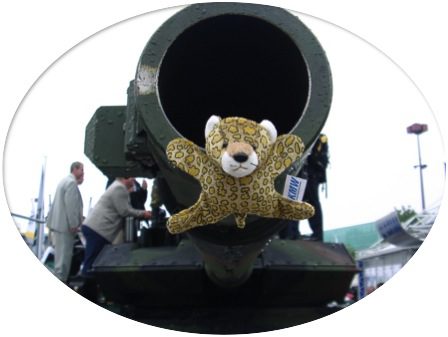 Press release on investments of German banks in the production and export of the military tank LEOPARD 2.

Who gains from tank exports?

Recent inquiries prove large investments of German banks and investors in the production and export of the military tank LEOPARD 2.

According to investigations conducted by the Dutch agency PROFUNDO (Research: German banks involved in the export of tanks to Saudi Arabia; A research paper prepared for Facing Finance), at least 14 German financial institutions hold shares of the producers of the tank Leopard 2 worth € 1.74 bn. Furthermore, German banks have recently granted loans to such corporations amounting up to € 2.75 bn. The study requested by the organization FACING FINANCE proves that several influential private banks (Deutsche Bank, Commerzbank, Hypovereinsbank, DEKA and DZ Bank), insurance companies (Allianz, Württembergische LV), Federal State Banks and the KfW banking group are investing or involved in lending operations to tank producers. “So far, none of the banks and insurers examined has publicly distanced itself from these irresponsible weapon deals. Apparently, gaining from such transactions is not deemed problematic”, stresses Thomas Küchenmeister, coordinator of Facing Finance.

On June 27, 2011 the German Federal Security Council has approved the export of 200 high-tech Leopard 2A7+ tanks toSaudi Arabiain a closed meeting provoking fierce protests of MPs and the public. According to experts from theBonnInternationalCenterfor Conversion (BICC), the Leopard tank possesses a particular design which enables its usage against riots in urban areas. Only in 2011,Saudi Arabiamade use of military force to support its neighboring countryBahrainin striking down the democracy movement causing internationally condemned bloodshed. The export approval is irresponsible and should never have been granted, so the critique, because it infringes the arms trade guidelines established in 2000. These guidelines stipulate that weapon exports shall not be granted to countries involved in armed conflict or in which such an export might cause, maintain or aggravate tensions and conflicts.

With a volume of approximately € 1.7 bn, Krauss-Maffei Wegmann and Rheinmetall are the main beneficiaries of the deal. Several other retailers quoted in the stock exchange, which are partially owned by car industries Daimler AG (MTU) or Volkswagen (Renk), also take part in the tank deal. “The producers, but also their shareholders and investors become “winners” of the Leopard deal, not to mention the banks themselves which ultimately enable the production due to their lending and financial services. The Arabic democracy movement are thus to be labeled the “losers” of the deal”, says Thomas Küchenmeister.

For the first time, 21 institutional investors have criticized the lack of a global control system aiming at preventing such irresponsible arms trade. According to the investment group, such negligent trade of conventional weapons could lead to gross violations of human rights and international law. This would render arms producers and investors equally responsible. Moreover, irresponsible transactions foster conflict and lead to political instability, decreasing GDP growth rates and corruption. Thus, the investment group urges companies and trade associations to support the UN Arms Trade Treaty (ATT) in accordance with their common principles (Global Investor Statement on the Arms Trade).

A few months ago, Facing Finance investigated the connection between producers of cluster munitions and publically funded pension funds (Riesterfonds). It is likely that quoted Riester-products through their holding in MAN, Rheinmetall or Northrop Grumman are involved in irresponsible weapon trade deals.

Facing Fiance has called on banks and insuring companies to cease any business relations which profit from irresponsible weapon trades under the scope of the guidelines on arms trading.

Statement of the Deutsche Bank:

Facing Finance has confronted several banks and insurers with the conclusive remarks of the study and asked them for a statement. The Deutsche Bank submitted the following comment:

„The Deutsche Bank maintains commercial relations to corporations of the defense industry within the limits of the law. However, we will not comment on relations with individual clients.”

Further information on our sustainable management system and our risk management can be found under: www.banking-on-green.com.”